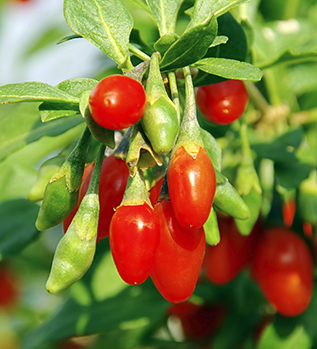 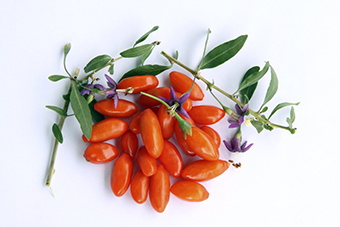 
One quarter cup of dried goji berry fruit contains 90 calories, 4 grams, and 11 of the essential amino acids of protein per serving. Goji berries have an ORAC rating of 3290, which puts it between apples and blueberries in terms of antioxidant power. Goji berries have been used for over 2000 years in traditional Chinese medicine.


The use for the berry was first recorded by Emperor Shen Nong in a book called Shen Nong Bencaojing around the year 200 B.C. There is also an ancient Chinese legend that says a man named Li Qing Yuen consumed the Goji berries daily and lived to be 252 years old. Goji berries give an amazing boost in energy due to the high polysaccharide or complex sugar content. You can buy Goji berry plants and other orchard trees that can be grown in any soil type, as long as the soil drains well. The Goji plant grows well in full sun or partial shade. Researchers are currently running studies to test the exact capability of the berry to reverse or halt the growth of cancerous tumors.

More about the Goji Berry Plant...

The Goji Berry, also known as "Wolf Berry" has been grown in Asia for centuries. The Goji Berry plant has become very popular in the United States due to its valuable health properties. The Goji berries, stems and leaves are very nutritious and extremely high in antioxidants. Besides the health benefits, the Goji berry tastes like a cross between a cranberry and cherry and has a great flavor.


The Goji Berry plant is easy to grow and is tolerant to both cold and hot climates. The plant is self-fertile and produces a small purple flower. The stems tend to grow long and trailing so a trellis or arbor is recommended. With routine pruning you can keep the plant in more of a bush form and the pruning will help reduce the amount of thorns that appear on older stems.


Yes, the Goji Berry plant produces thorns, but when considering that it is easy to grow, has pretty flowers, is self-fertile, grows in both cold and hot climates, tastes great and has the highest concentration of antioxidants of any fruit, the Goji plant is the perfect plant for patio or garden. We offer Goji Berry ‘Crimson Star’ in a large 2 year old fruiting size plant that is equivalent to a 3 gallon size Goji plant.

Shipping dates are subject to change. (What's This?)